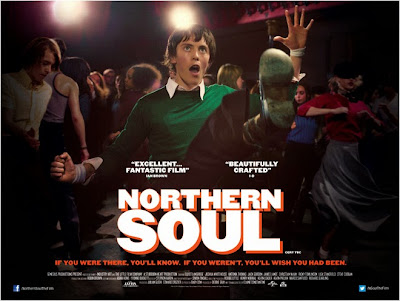 As a brief introduction for the uninitiated, the term “Northern Soul” was coined by DJ and soul music aficionado, Dave Godin, in 1970 and can be loosely described as a specific type of heavily syncopated, black American “Motown-esque” dance music, often originally released in the 1960’s, by unknown and largely forgotten artists. The burgeoning scene that grew up around the phenomena developed its own unique fashion style and dance moves and peaked during the mid 70’s with worshippers flocking to several well-known venues including Manchester’s Twisted Wheel, The Golden Torch in Stoke, Blackpool Mecca and most famously Wigan Casino, where the film is centred.

t has been reported that the “committed clubber” and Northern Soul obsessed writer and director of the film, Elaine Constantine, remortgaged her home, cashed in her pension and poured all the family savings into funding its making which has taken over three years from the first day of shooting to its commercial release in October this year. It probably goes without saying that this fact alone would guarantee an astonishing level of detail and authenticity from such a devotee to the scene – and we aren’t left wanting.

Growing up in a farming community in the West Country during the 70’s, the nearest I got to dancing at a drug and drink-fuelled “all-nighter” was playing air guitar to Status Quo at a local barn dance while sipping cans of Shandy Bass and getting a sugar rush from too many sherbet dib-dabs, but, like all great period dramas, Northern Soul’s strength lies in is its ability to transport you to a time and place with such skill, that, on leaving the cinema, I spent 5 minutes wondering where I’d parked my Morris Marina.

The film itself, set in 1974, is an age-old tale of disenchantment, rebellion, friendship, love, loss and hope but with added dancing and a peerless soundtrack. There are decent cameos from experienced actors Steve Coogan (teacher), Lisa Stansfield (mother), Ricky Tomlinson (granddad) and John Thomson (youth club DJ), but the two main leads, Eliot James Langridge who plays John Clark and Josh Whitehouse his best mate Matt are relative newcomers to the big screen, and both put in superb and believable performances. They portray a couple of teenagers who discover the joys of the Northern Soul scene which serves as something of an escape route from their uninspiring school days and dead-end factory jobs. Such is their passion for the music that they make plans to open their own club after flying to America with a dream of bringing back bundles of undiscovered and collectable 45’s.

There are both moments of high comedy and some touching, emotional scenes during the film’s 102 minutes, but what sets it apart from its inevitable touchstone, 2010’s “Soul Boy”, is the dark and menacing undercurrent of drug use which is an increasingly prevalent theme throughout. As a result of the escalating amphetamine abuse we witness imprisonments, paranoia, the breakdown of friendships and ultimately, tragedy and these are the main reasons, despite the two movies being depictions of the same subject, that they are in many ways, about as similar as Mickey Blue Eyes and The Godfather.

One point should be made clear – the naysayers bemoaning the fact that the film doesn’t contain enough dancing or music should probably be seeking out a more prosaic representation of the scene. If it’s facts and reality that you’re after there are some excellent documentaries available about this wonderful genre, however, it does seem that the people making these negative statements are missing the point – this is fiction. Well written, meticulously researched and at times, no doubt, subject to a little artistic license, but fiction nevertheless.

So, for anyone that hasn’t actually seen the film yet and who may have been put off watching by the pedantic few, rest assured, as plenty of great music and incredible dancing DOES form a not inconsiderable backdrop to what is, ultimately, a cracking, well produced story. Keep the faith – you won’t be disappointed.