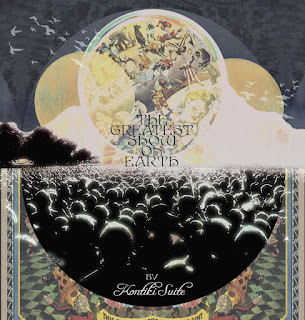 Back in 2012 Carlisle’s Kontiki Suite released their brilliant debut album “On Sunset Lake”. Inexplicably, I managed to miss it at the time but after recommendations from several of my trusted musical cohorts, I eventually got hold of a copy in mid 2013. Suffice to say I was blown away by what I heard and had I not missed the original release date, there is absolutely no doubt that it would have been one of my albums of the year.

Three years on, and this time around (probably due to regularly badgering the band on Twitter that they should pull their fingers out and release something new asap) I had advance warning that “The Greatest Show On Earth” would be released in early October. Well, after living with it on repeat for over a week I can happily announce that it is an absolute cracker of an album.

Not only is this another collection of finely crafted songs, large on melody and sprinkled with a liberal dusting of Laurel Canyon country and psychedelic shimmer, they also sound more accomplished and confident both lyrically and musically. In fact, most of these tracks certainly wouldn’t sound out of place on albums released by their heroes and undoubted influences, The Byrds, Neil Young, Gram Parsons, The Band, Buffalo Springfield or more recently, The Jayhawks and Teenage Fanclub.

Although each of the album’s ten tracks are undoubtedly worthy of mention, for me the highlights are opening single “All I Can Say” (above), “Here For You Now”, with shades of Here Comes The Sun era Beatles running through it, the sweet and sour “Under The Rug”, the 8 minute Neil Young-esque country-rocker “Burned” and album closer, the gorgeous and reflective “Years Roll On”.

Without any shadow of a doubt, in a world where substance over style should be the order of the day, Kontiki Suite would have a massive audience to appreciate their talents, so go out and buy their music and help redress the balance- I guarantee you won’t be sorry.