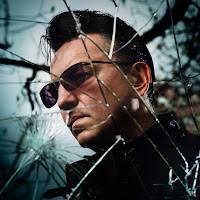 Here’s the thing, I fully accept that all art is subjective. However, I still stand by my statement that most of today’s raft of “pop” acts are as closely related to music as Spam is to meat. Subjectivity aside though, if there’s currently a better British singer, songwriter or guitarist than Richard Hawley then I’ve yet to hear them. Last nights gig at Bristol Colston Hall, the final of one his current tour, was further proof that Hawley is, seven albums into a solo career, at the very peak of his powers.

Hawley seduced us with nearly two hours of the sweetest melodies (plus the occasional rocking wig-out), all delivered in his rich Sheffield via Tennessee baritone and accompanied by musicians of the very highest order. But great music isn’t all you get at a Richard Hawley show of course. We were also party to an especially loquacious host this evening who was dishing out some hilarious between-song banter worthy of the driest comedian.

The setlist spanned tracks from right across his exceptional body of work. Personal highlights included (in his own words) “Tuesday PM – the most miserable song I’ve written for a long time” from his current album, Hollow Meadows; an outstanding version of the brooding “Down In The Woods” from Standing At the Sky’s Edge and a stunning performance of “The Ocean” from 2005’s brilliant Cole’s Corner to close the gig. The crowd also played their part by singing a rousing Happy Birthday to his daughter Rosie who is currently studying at Bristol University and was in the audience.

Two final observations from me: firstly, the fact that Hawley hasn’t even been nominated for this year’s Mercury Music Prize is all the proof you need that, in 2015, industry awards are virtually irrelevant. And secondly, in an age when auto-tuned, pro-tooled, X-Factor groomed wannabees are huge stars, Florence & her badly oiled Machine somehow managed to headline Glastonbury and Sam Smith was chosen to write AND “sing” a Bond theme, Hawley should be enjoying superstar status and performing to sell-out crowds at Caesar’s Palace every night.

Rant over, here is the maestro with “I Still Want You”, his current single and my favourite track from one of the best albums of 2015.