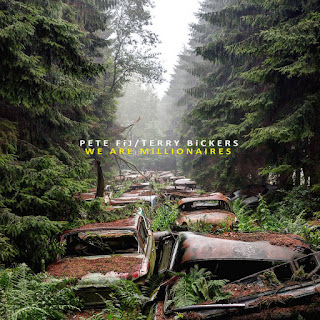 Pete Fij and Terry Bickers are best known as the lead-singer in Adorable and the guitarist in The House Of Love respectively. Both bands had varying degrees of success on the (then) relatively unknown Creation label in the late 80’s and early 90’s and although critically lauded in the press and touted as the next big thing(s), by the mid 90’s both men were treading different musical paths. As Pete Fij/ Terry Bickers, they first started writing and playing low key gigs together in 2009 although it wasn’t until 2014 that the journey started in earnest when they released “Broken Heart Surgery” – their critically acclaimed debut album.

If it really is true that the greatest source of songwriting material is derived from the pain of a broken love-affair, on the evidence of their deliciously maudlin second LP, “We Are Millionaires”, these two gents haven’t half been through the wringer! However, despite the melancholic tone that Fij’s careworn vocal style sets, the melodies throughout are beautiful, and despite their downbeat nature at times, the superbly crafted lyrics often display plenty of wry, ironic, humour.

Although it would be difficult to describe any of the songs on “We Are Millionaires” as happy, there are light moments, notably on album opener “Let’s Get Lost Together”; the Lee Hazlewood channelling, “Waking Up” and also, (eventually!) during the closing track “Sometime Soon” in which, over Bickers’ Twin Peaks style twang, a weary Fij declares that “everything will be OK”. Other highlights include the catchy, string-drenched opening single “Love’s Going To Get You”; the haunting late-night shimmer of the album’s title track; Bond theme in waiting “If The World Is All We Have” and the poignant “I Love You”, in which Fij pleads “I love you, is it really so hard to say, it doesn’t matter if it’s not true, just say it to me anyway”.

The undoubted charm of this fine record lies is in its lush, richly textured arrangements combined with quirky takes on love, loss and redemption – universal themes that have been given a fresh perspective by these two massively underrated musicians. Fans of Lloyd Cole, Richard Hawley, I Am Kloot, Lee Hazlewood, The Libertines et al will find much to love here, although if there was any justice in the world, Pete Fij and Terry Bickers would already be on that list.