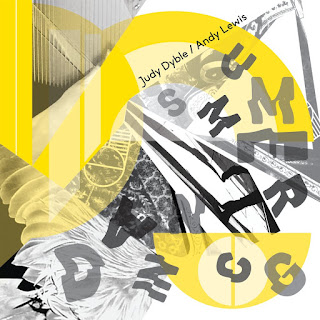 Take an erudite, semi-retired ex-librarian who was the original, crystalline voiced singer in Fairport Convention, a member of pre King Crimson band Giles, Giles & Fripp, and also one half of critically acclaimed but short-lived folk duo Trader Horn; put her in a recording studio with an eclectic soul/ funk DJ who is also a solo recording artist, a producer, and a bass-player with Paul Weller’s band; add a generous dusting of sunny psychedelia and a pinch or two of gently burbling synths to a collection of richly textured, pastoral, occasionally elegiac songs and voila you have Summer Dancing – the beguiling new Acid Jazz release from Judy Dyble/ Andy Lewis.

Although on paper the most unlikely of bedfellows, Dyble with her cut-glass almost RP vocal style and Lewis with his deft, retro-modern production values (with the aid of Japanese hand drums, timbales, glockenspiels and a vintage Optigan of course…..) have somehow forged a fertile alliance. Due to the subtle lysergic currents, especially evident on album opener and first single He Said/ I Said (below), swirling through many of the fourteen tracks, the spirit of 1967’s “Summer of Love” is never far away, which is especially serendipitous as earlier this month Dyble performed at Cropredy with The Band of Perfect Strangers as part of Fairport Convention’s 50th Anniversary celebrations.

As a whole, but especially amongst the bucolic swoon of Up The Hill and Saint Etienne-esque paean to the capital, A Net Of Memories (London) (complete with travel report!), the album often evokes memories of an imagined past when life was simpler, summers were warmer, birdsong was

louder, bees were buzzier and lazy, hazy holidays were never far away. Other themes of the human condition are addressed; the intensity and power of love in the hypnotic, A Message; insomnia, in the woozy, dreamlike, Night Of A Thousand Hours (below); and ageing in the poignant and heartfelt Tired Bones “now the smell of canvas fills my nose, as they count me out in old-mans clothes, when the fight has all but gone from tired bones”. For me though, the highlight of an album that contains barely a wasted note, let alone a duff track, is the beautiful, yearning love song, No Words.

Although it’s difficult to align this exceptional collection of songs to anything else currently swirling around the musical ether, if you find them as captivating as I have, you might also enjoy the last couple of releases by legendary British singer/ songwriter Bill Fay who inexplicably, before his masterful resurgence in 2012 with the stunning Life Is People and follow-up, Who Is The Sender, in 2015, decided to “retire” for forty-one years. Once you’ve fallen in love with Bill’s work, you can then move on to Californian, Linda Perhacs who, after releasing the influential but poorly selling Parallelograms in 1970, like Bill, thought she’d also have a little rest and “retired” from music for an even more staggering forty-four years! However, it was well worth the wait as in 2014 she gave us the incredibly beautiful psych-folk opus, The Soul Of All Natural Things.

Anyway, I digress. If, as I suspect, due to the fact that you’re reading this blog, you really are a discerning music lover, Summer Dancing is a bona fide, genre-spanning classic which absolutely all of you MUST hear; I will even go so far as to say that with four months of 2017 still remaining, if there’s a better record released this year, I’ll happily eat my trousers.