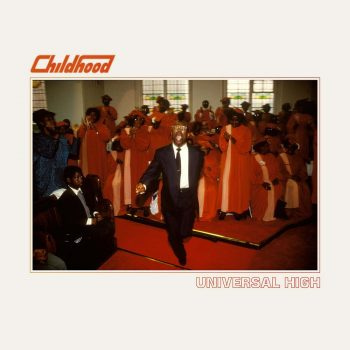 Firstly, let’s get one thing straight: “Lacuna”, the 2014 debut album from South London’s Childhood, was NOT a bad record. However, with nods to Puressence and the House of Love here, Toy and Temples there and several others of that broad ilk in between, the major problem that Childhood had was being a composite of many other indie guitar bands of the past 25 years. Writing decent songs and being competent musicians is one thing, but if the noise you’re making is derivative of your already established peers, you need be something special to stand out, and despite the album containing two excellent singles in the baggyish Stone Roses channelling “Blue Velvet” and the soaring, anthemic “Solemn Skies”, I’m not entirely sure that they managed it.

The great news is that on their exceptional new album, “Universal High”, they haven’t just repeated the same formula hoping that it would somehow attract a bigger audience the second-time around, they’ve reinvented themselves so completely that, whilst listening to these ten gloriously sunny pop/soul tracks, you might well be forgiven for thinking that there are two bands called Childhood – with this one being the far superior version!

Back in June, whilst we were enjoying the rarity of warm, sunny day in the UK, I heard what sounded like a classic, but unfamiliar, 70’s soul number drifting mellifluously from the radio. With shades of Roy Ayers and the Young Rascals plus a soaring falsetto that Curtis Mayfield would have approved of, I was excited to know who this new old band was. It came as something of a surprise then when it turned out that the track I’d just enjoyed, the groovy, summer swoon that is “California Light”, was recorded by a British act – not only that, a British act who only three years previously were indie-rock also-rans and who had seemingly disappeared from the radar.

In Ben Romans-Hopcraft, Childhood now have a versatile lead singer whose new-found style lends itself perfectly to the songs on Universal High; an album which, although very much a product of 2017 with more recent touchstones being the electro-poppy psychedelia of Tame Impala, MGMT, B.C. Camplight or Mac DeMarco, wears its love of 70’s/ early 80’s soul and disco very much on its sleeve. Opening track “AMD” tips a nod to the Isleys, “Cameo” might be the best song Imagination never recorded and Kool & The Gang’s classic, synth-heavy instrumental, “Summer Madness” pervades several tracks with its woozy groove. Elsewhere the summery theme continues with one of the many album stand-outs, the bouncy sing-along “Don’t Have Me Back”, with its gorgeous Beach Boys infused melody, complete with sax solo and a beat borrowed from the Motown canon.

Overall then, whilst Lacuna was certainly an accomplished record, it got lost in a sea of sameness. Universal High, on the other hand, is the sound of a young band who, even though the album’s influences are many, have found a sound of their own that pays tribute and reinvents their inspirations rather than getting bogged down and swamped by them. All we need now is for the rest of the world to wake up and discover Childhood too because if they come back in three years’ time reinvented as a heavy metal combo, my review will be far shorter………….