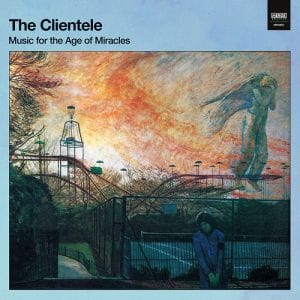 For the uninitiated, The Clientele are a London-based British band from deepest, darkest Hampshire who specialise in a superior and unique brand of intelligent, literary dream-pop.  They released “The Violet Hour”, the first of their (now) seven superb albums in 2002, but, despite huge critical acclaim, have never gained the commercial success in the UK that their rich talents deserve. It came as no surprise then, that after their lauded 2010 mini-album “Minotaur” once again failed to give them a much-deserved break, in 2011 they announced they were taking an “indefinite hiatus”. Plus, with founder member, vocalist and main songwriter Alasdair MacLean also recording material with his “other” band, Amor De Dias, most fans, I suspect, thought that the game was finally up………….until now!

Although having always trodden a somewhat Arcadian path, on “Music For The Age Of Miracles”, more so than on their previous records, the band have explored a more gentle, pastoral psychedelia; an autumnal palette of sounds born in leafy London suburbs but imbued with the warmth of a Californian Santa Ana breeze. The album’s twelve new, but dreamily familiar songs (including three instrumentals) imparted as always in MacLean’s breathy, languid vocal style, have a lysergic quality – seemingly plucked from that magical realm somewhere between wake and sleep. It’s no coincidence either that the hiring of multi-instrumentalist and arranger Anthony Harmer, who, whilst complementing original members, James Hornsey and Mark Keen, has also brought subtle new dimensions to the band’s sound by introducing, amongst other things, the exotic santur (a Persian dulcimer) and saz (a Turkish stringed instrument) into the mix.

Album opener, the hypnotic and hymnal “The Neighbour”, is one of the most beautiful tracks you will hear this year and sets the tone for the rest of this exceptional album. Through the swooping choral backdrops a violin solo gives way to uplifting and sublime key changes whilst MacLean gently, but optimistically, intones that, “In the corridor, the face of God is smiling”

Running hand in hand with the album’s abstract, dream-state imagery, themes of both the natural and celestial worlds abound. Superb first single “Lunar Days” is (possibly?) a lament, wrapped up in an autumnal metaphor, about the creep of London’s suburban decay: “When it’s late November and you’re lost in the leaves/ And you speak in beaten copper tongues that nobody hears” followed a few lines later by “So, I walked along the street with no one home/ Lamps no one lit, roads no one drove” are magical lyrics and encapsulate the feel of the whole album.

“Falling Asleep” is a stroke of genius –  a musical adaptation of celebrated First World War poet Siegfried Sassoon’s bucolic poem of the same title, which, for this budding writer and music lover at least, is worth the purchase price of the album alone. The melodic, orchestral “Everyone You Meet” with opening couplet “Pleiades fall/ Pleiades rise”, the brooding and elegiac “Constellations Echo Lanes” and two of the three instrumental tracks, the brief but lovely semi-classical vignettes “Lyra in April” and “Lyra in October”, have stellar connotations while the third instrumental, “North Circular Days” is a pretty tribute to an ugly road.

Harmer’s instrumentation and arrangement on “The Circus” push it in a “folky” direction and with a little stretch of the imagination, it could have been a track that the late great Ronnie Laine may have been happy to record. The lyrical stream of consciousness of “Everything You See Tonight Is Different From Itself”, complete with harp, insistent guitar refrain and uplifting trumpet flourishes complementing the lush, layered vocals, is another album high point; “The Museum Of Fog” is a spoken word track recounting the tale of a young man’s evening attending a real/ imaginary gig which may, or may not, have been fuelled by narcotics of a hallucinatory nature……..

“Swallows wheel from sun-bleached eaves/ Trucks glow on peripheries/ Light the lamps, the empty house is falling” are the opening lines from the exquisite, goose-bump raising final track, “The Age Of Miracles”, and which, in just a handful of words, explain far better than I ever could why the return of The Clientele should be lauded as one of the musical high-points of 2017.

Fans of Belle & Sebastian, Tindersticks, The Blue Nile, Nick Drake, The Byrds and even Broadcast or Saint Etienne in their more tender moments should embrace and then rush out to buy “Music For The Age Of Miracles” because, if this wonderful band decide to take another extended sabbatical through lack of sales or wider recognition, we will all be the poorer for it.