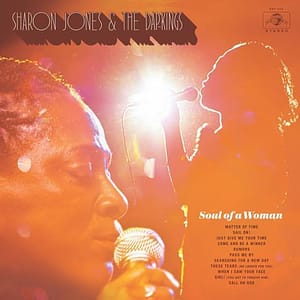 Formed in 2001, the American funk and soul label, Daptone  Records is, in terms of both recording methods and quality of output, the nearest we now have to classic Stax or Motown. So, when in the space of little over a year, the label lost not only their two biggest stars but two giants of the soul scene, full-stop, it could be considered something of a disaster.

Firstly, in November 2016, Sharon Jones succumbed to the cancer she had fought so bravely for several years, and then, in September this year, we also lost The Screaming Eagle of Soul,  Charles Bradley, also to cancer. Although both artists were relatively late starters in their professional careers, they both released records that, when measured against some of the finest soul albums of the past 60 years, comfortably hold their own. Cruelly, at the time of their premature deaths, both singers were at the peak of their powers with, undoubtedly, some of their best work still to come.

Including their 2015 Christmas album “It’s A Holiday Soul Party”,  “Soul Of A Woman” is Sharon Jones & The Dap-Kings seventh studio album since they first entered the studio to record their, and Daptone Records, début record “Dap Dippin With Sharon Jones & The Dap-Kings” back in 2002. Since then, although proudly flying the retro-soul tag in a generation full of manufactured, bland and generic singers often touted as “the next ———” (fill in blanks depending on record company desperation), Miss Jones proved, with each new release, that she was the real deal – and then some. On their last studio album proper – 2014’s “Give The People What They Want” –  armed with their best set of songs yet, they sounded more cohesive and fully formed than ever, despite Sharon’s illness, and subsequent treatment, delaying its release.

“Soul Of A Woman”, poignantly released on November 17th, 2017 to coincide with the first anniversary of Sharon Jones’ death is, sentimentality aside, a wonderful record. Of course, there is immense sadness that it’s a posthumous release, but, ably supported by the fabulous Dap-Kings as always, it comprises a set of eleven songs that will serve as a lasting tribute to her immense talent.

The album kicks off with a rousing call for world peace and unity in, “A Matter Of Time” followed by the terrific James Brown-style funk of “Sail On” (below) in which she offers redemption to a former lover who almost certainly doesn’t deserve it! “Give Me Some Time” and “Come And Be A Winner” take things down just a notch before the catchy as hell, Motown-esque “Rumors” ends the more upbeat first-half of the album.

Side two, despite being more ballad-heavy, is still full of positive vibes. The Hammond rich Southern Soul of “Pass Me By” is gorgeous but lovelorn, and, with a passing nod to Rose Royce’s “Wishing On A Star”, “These Tears (No Longer For You) sees our leading lady displaying her trademark strength in dealing with the bad-boys in her romantic liaisons. The languid, summery “Searching For A New Day” could have been lifted from a Style Council greatest-hits album; the soaring “When I Saw Your Face” is a straight-up tale of love at first sight and “Girl! (You Got To Forgive Him), could have, with a little push in the right direction, been lifted from a Bond movie – and how great would Sharon Jones singing a Bond theme have sounded!

And yet, for all its positivity and upbeat grooviness, when the last, plaintive notes of the beautiful and moving gospel hymn “Call On God” (below), that Sharon wrote forty years ago when singing with the Universal Church of God choir,  fade away, I had tears rolling down my cheeks.