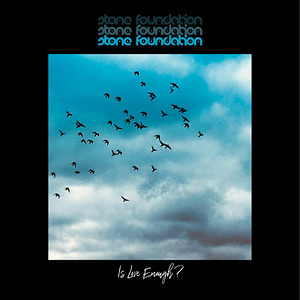 As I’m a big fan of Stone Foundation and have followed their progress since they released “Small Town Soul” back in 2008, I’m going to start this review with a personal observation…

Although Paul Weller produced, wrote for and sang on Stone Foundation’s 2016 album “Street Rituals”, and has been involved to varying degrees with them ever since, I think it’s somewhat disrespectful to this hugely talented bunch of musicians when he’s sited as the reason for their success. Yes, of course having the great man on your team is a big plus, but their relentless gigging, positive and consistent online presence and the fact that they’re the best white British funk and soul group since the Average White Band is certainly a huge factor too.

Now I’ve got that off my chest…

Sadly, it’s something of a cruel irony that in a year when one of the best live bands in the country release their finest album to date, a global pandemic comes along meaning that (a handful of live dates in between lockdowns and a few, much-appreciated internet shows aside), they can’t tour it! But, despite the frustration that I know these fine gentlemen are feeling by not doing what they love best, the tireless work they put into connecting and interacting with their loyal fanbase via social media will undoubtedly reap rewards when venue doors (hopefully) open again later in 2021.

As is the case with everything Stone Foundation do, “Is Love Enough?” is a set of songs bursting with positivity and hope. But even for them, given the hugely divided society we are currently living in, writing a whole album around the central themes of love, compassion and empathy was going to be a boundary-pushing and ambitious undertaking.

However, songwriter, bassist and founder member Neil Sheasby is amazed at how enjoyable and effortless the whole process was. During a recent conversation, he told me that “After we’d finished the record, I still sat with it for at least a couple of weeks thinking “that can’t be it!” It was all too simple, but I soon realised we’d caught the intended spirit that we’d approached the sessions with, we’d nailed it and it didn’t need fixing. We’d made the album we set out to create”. And what a great album it is!

Stone Foundation have always taken a collaborative approach when recording new material. If you’re unfamiliar with the band, you’ve only got to read the “who’s-who” list of artists that have appeared on their previous albums to realise how respected they are: Nolan Porter, Carleen Anderson, Andy Fairweather Low, Graham Parker, Dr Robert, Bettye LaVette, William Bell, Kathryn Williams, Paul Weller (among others!).

This approach has still been maintained on “Is Love Enough?”, however, both SF main men, Sheasby and lead singer Neil Jones decided that for the recording of this album they would use (alongside Weller of course) a more contemporary group of singers. And, once again, their choices were inspired.

Two of their guest artists both appeared in 2019’s Acoustic Egg Box Top 30: the brilliant Durand Jones (AEB No.3) on the ballad, “Hold On To Love” and a young man in possession of one of the UK’s finest soul voices, Laville (AEB No.13) on the disco-funk track “The Light In Us”. Throughout the album current Mother Earth and former Brand New Heavies vocalist, Sulene Fleming, provides backing vocals and also has a joint billing alongside rapper, Mr Memory, on “83: This Is Our Time”; a superb slice of acid jazz and my favourite track on the album.

Paul Weller, as supportive of the band as ever (the album was recorded at his Black Barn Studios) is in fine voice on the Balearic groove of “Deeper Love”. He also has shares vocal duties on the soulful “Picture A Life” (which to these ears sounds like the best song Lou Rawls never released) and plays guitar on three other tracks. With Mick Talbot (keyboards) and Steve White (drums) also putting in appearances, not only have we been blessed with a brilliant new Stone Foundation album, we were only Dee Cee Lee short of a Style Council reunion!

With all this talk of the guest slots, it’s easy to forget that the band are consummate musicians in their own right; in Neil Jones, they have a vastly underrated singer who is every bit as good as any of his contemporaries plus their brass and rhythm section would grace any stage this side of Memphis. And if proof IS needed for any of their credentials, one listen to the Afro-beat jazz-funk banger Af-Ri-Ka will lay any doubts to rest!

As previously mentioned, the central themes of “Is Love Enough?” are love, compassion and empathy. The threads of these themes are skillfully woven together by a series of interludes throughout the album; brief spoken word pieces narrated by friends of the band who they met on their travels. Three of the beautiful piano and cello backed vignettes were written by their Japanese, Spanish and German narrators about what love means to them, whilst “Love’s Outro” sees Peter Capaldi close this exceptional album with a fitting passage written by Vincent Van Gogh:

“It is good to love many things, for therein lies the true strength, and whosoever loves much performs much, and can accomplish much, and what is done in love is well done!”

Let’s just hope there’s a return to some kind of normality as soon as possible in 2021 as this is one band that really do need to be seen live. I can’t wait until Friday 22nd October when they’re in Bristol again, but for news of all their other dates and venues visit their website for details: https://www.stonefoundation.co.uk/
Please follow and like us: